March is National Intellectual and Developmental Disabilities Awareness Month (NIDDA), which seeks to raise awareness about the inclusion of people with developmental disabilities in all areas of community life. Mosaic will feature one person we serve each week during the month who exemplifies this national campaign by leading a BOLD life.

James Kences, 64, defies the stereotypes many people place on what it looks like to have an intellectual or developmental disability (IDD).

While he’s on the autism spectrum, compounded by a non-verbal learning disability and obsessive compulsive disorder (“I do lots of ‘checking’ and am always on guard about contamination, which causes me great frustration”), he is very articulate and affable. In fact, he’s an absolute pleasure to meet.

He also possesses an astonishing gift of memory with an incredible, encyclopedic knowledge of York, Maine history, which is his cherished hometown. This has made him the town’s unofficial–many would say official–historian and vocally strong York historic preservationist.

But he wasn’t always that way. Supported by Living Innovations, a service subsidiary of Mosaic in New England, his case manager Amanda Parker said 10 years ago when she met James, he trusted few people and barely stepped foot out of his home.

“He was depressed and preferred to stay in his apartment. I often visited him to stay in touch and provide support–and we would meet outside because he wouldn’t let me in. Many times we would stand there in the middle of winter, and he would say ‘I don’t need anything, I don’t want anything,’ then he’d want to cut short the conversation to a few minutes by going back indoors.”

As part of its supports for James and others they serve, Living Innovations–as does Mosaic–advocates equality for those with IDD by bringing awareness to issues that affect their lives, and when possible, Living Innovations coaches those they serve to advocate for themselves. “We always told James, and still do, you are valued, you are an important part of the community, and you are entitled to the same rights as anyone else,” remarked Amanda.

Then, James, who is unable to keep a job long-term because of his disability, had to face a situation which at first seemed like an immense setback. But it actually transformed into a God-wink: The owner of his apartment, in which he’d been living rent-free for almost 15 years, had to sell it.

“I suddenly had to confront the fact that I’d have to leave York in order to maintain even my basic style of living,” James said. “Being an oceanside resort and tourist town, the cost of housing in York was beyond my meager means.”

Living Innovations was relentlessly trying to secure housing for James, but James knew he also had to do something himself. With that fortitude, he took a big step out of his comfort zone by going public. Very public. 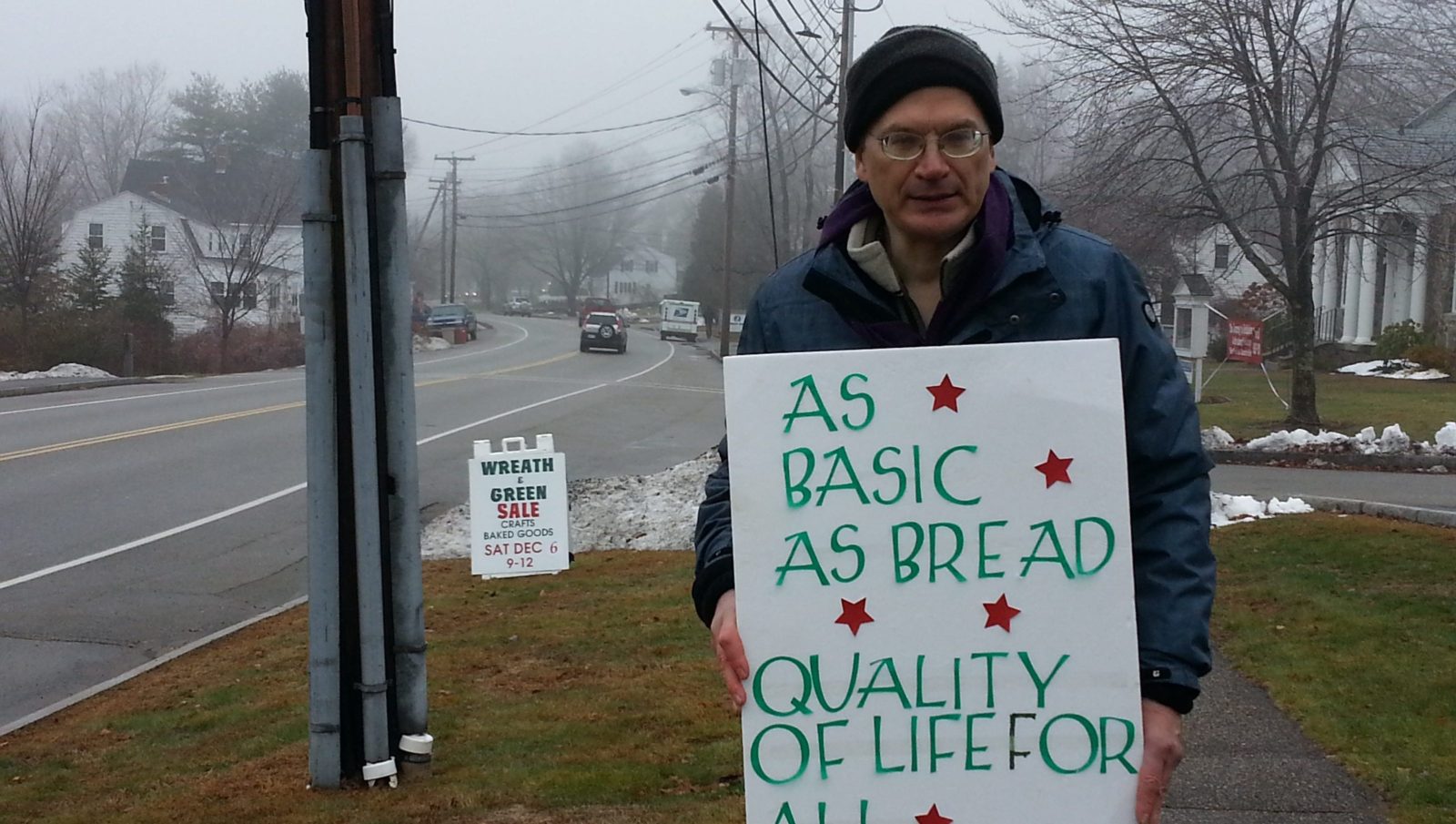 Holding a sign that read “As Basic As Bread–Quality of Life For All,” James staged a month-long protest in the middle of York’s town square to educate the public about his plight and his disability. While he garnered general empathy, it didn’t solve his housing problem.

So, with renewed resolve, he subsequently held an even longer vigil with what he called “a new strategy.” He went on what he called “a very responsible hunger strike” for 30 days, subsisting on only hot tea and juice. According to James, with subsequent media coverage from the local newspaper (including regular updates), Maine’s state public radio, and the nearby Portland NBC affiliate, “I finally got the town’s attention.”

With that, came another God-wink–York’s community started to rally around him. Someone offered temporary housing until James and Living Innovations could find a permanent place for him to stay. A group of citizens formed a weekly support group with Living Innovations to discuss how they could best help him live a more meaningful life. Importantly, the owner of the town’s popular Bagel Basket, Sean Mitchell, became aware of  James and immediately offered him one of the apartments over his restaurant. “James told him he couldn’t afford it,” said Amanda, “but Sean said, ‘we can work that out later’ and then priced the monthly rent at a level James could afford.”

Out of all this, James developed a great sense of gratitude to York residents. That’s when he decided to leverage his love for research and history to give back.

This has made him an extremely busy person, from writing a monthly “York in American History” column for the local York Weekly and giving presentations at the local library or high school to spending several hours a week researching in the town hall office (the very place he stood in front of to mount his protests) and writing several publications. He’s also a member of the local conservation commission with the aim of “bringing renewable technologies to town.”

James now looks forward to meeting Amanda via Zoom once a week. He said he enjoys their  conversations, and it helps him focus on personal facets of his life. Additionally, Living Innovations has arranged in-home supports for a few hours each week to help James take care of his home.

James wants to acknowledge that his “recent experience of increased social confidence” is attributed to the “combined actions, kindness … and close partnership” of Living Innovations and another service agency. This is not unusual, as Living Innovations and Mosaic often partner with others to best serve the whole person, as that’s the priority.

James added, “I will always be indebted to them for those actions when indeed I was most in need of them.” 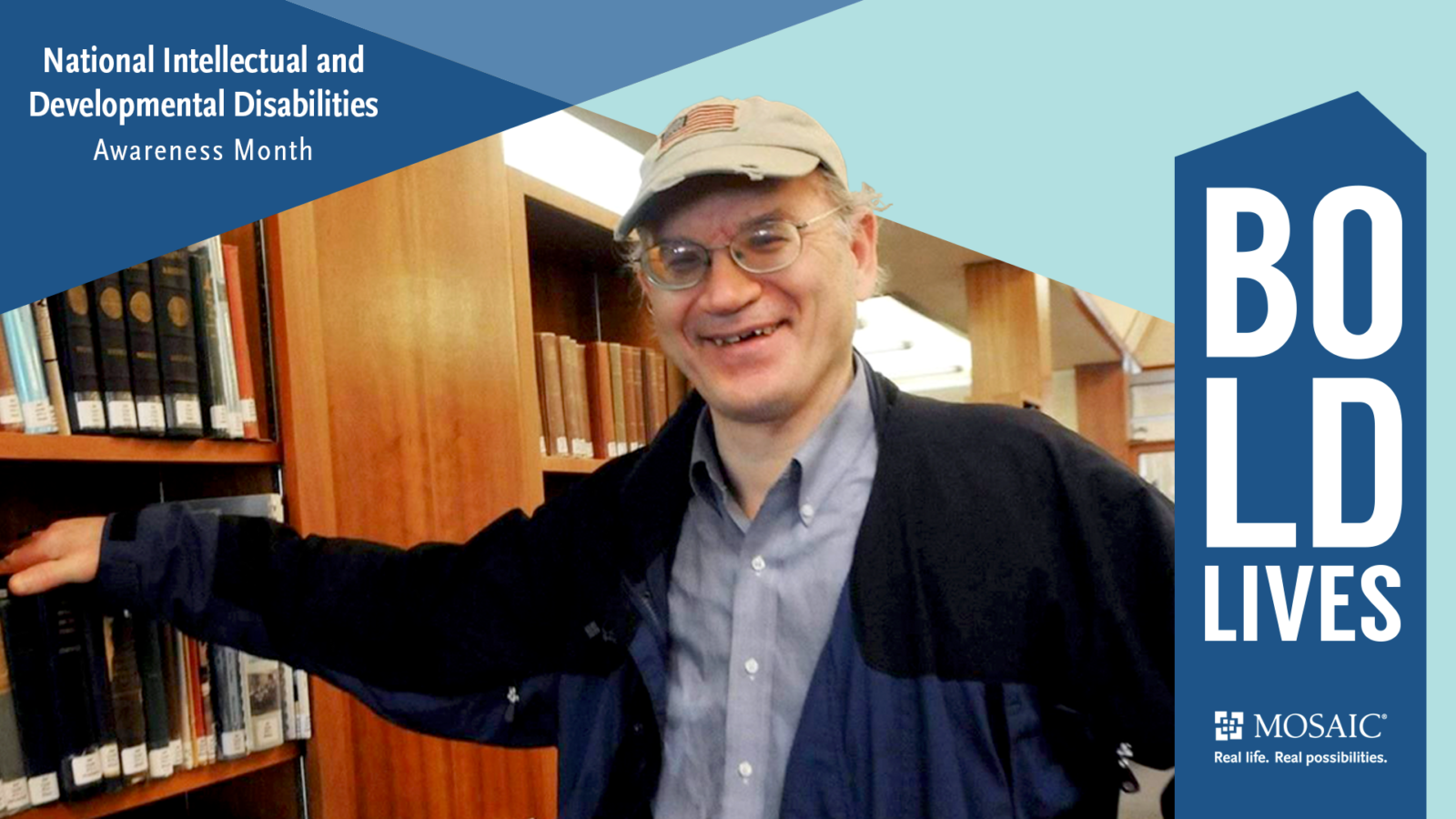