Use Your Power to Prompt Change

A good journalist doesn’t settle for simple answers. She digs deeper, even when it might make people uncomfortable.

When 37-year-old Christina Sankey froze to death after wandering away from her direct support staff person in 2014 in Philadelphia, Ronnie Polaneczky, a reporter with The Inquirer, asked “why” and “how.”

Immediately following the death, Polaneczky’s front-page story ran with the headline, “The death no one cares about.” It’s definitely worth the read. She argued that if Christina had been a cute 2-year-old, rather than a 37-year-old with severe disabilities, her tragic death would have caused memorials, prayer vigils and city action.

None of that happened. The police weren’t even investigating it as a suspicious death.

So Polaneczky started digging. As a result, the direct care staff received a court sentence for neglect of a care-dependent person more than a year later. And Polaneczky became a crusader for people with intellectual and developmental disabilities. 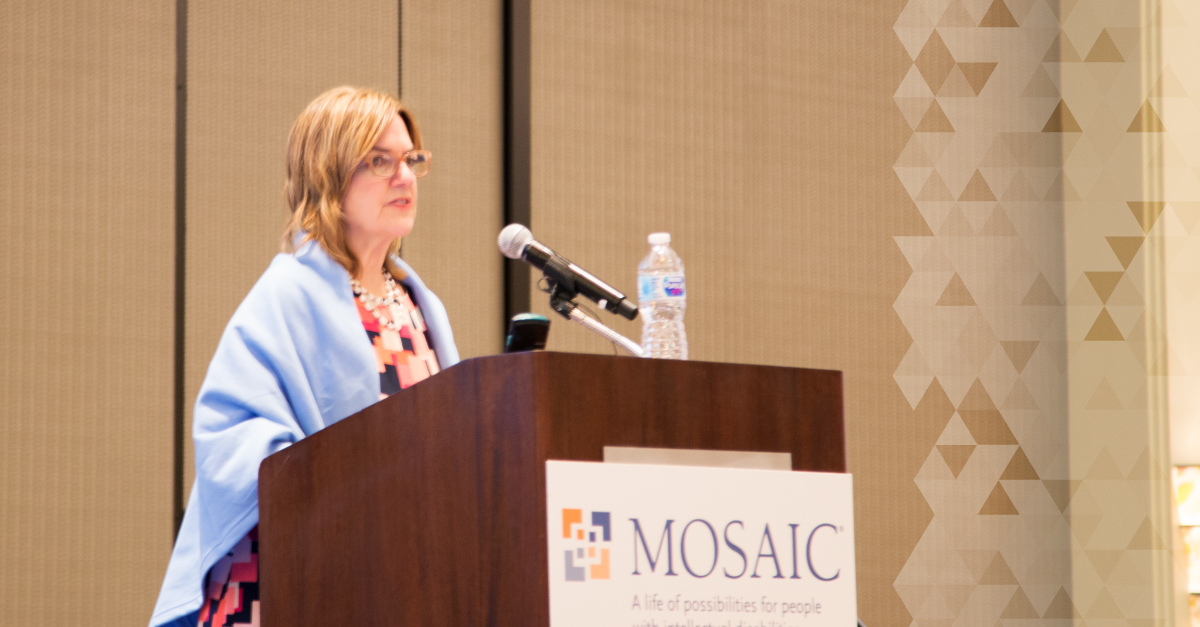 After the story ran, she said her inbox “exploded” with “horror stories” from parents. Many of them expressed the same sentiment: “I hope I die one hour after my child does,” reflecting their worry that there will be inadequate or no care for their loved one with a disability when they’re gone.

That led Polaneczky to devote 18 months to creating a four-part series, “Falling Off The Cliff.” The series looked at the dearth of services available for people with disabilities and the immense struggles families face for their loved ones and the importance of good organizations like Mosaic.

“Your work is complicated, serious and important,” she said, speaking at Mosaic’s annual leadership conference in Omaha in July. “If you get tired, it’s no wonder. … What you do is love in action.”

Polaneczky contends that our society does not give people who do direct care work the respect or pay they deserve.

“Men and women who feel called to this work are nothing more than devalued people caring for devalued people,” Polaneczky said. She noted the U.S. Department of Labor doesn’t even have a direct support professional category, but instead groups them with health aides and other workers.

Through her work, she learned of the “looming social, economic and moral crisis” facing our nation regarding people with disabilities.

Direct support professionals receive pay that is often near minimum wage, averaging between $9 and $12 per hour. Annual turnover runs higher than 50 percent.

These are big challenges. But there are also bright spots, Polaneczky noted.

Earlier this summer, she wrote a column about an anti-abuse/neglect law that was languishing for two years in the Pennsylvania legislature. Readers responded—the public responded. Because of the phone calls and messages to the legislature, the bill was passed and signed into law eight days later.

I’m grateful for people like Ronnie Polaneczky. She has a platform, and once she learned about the challenges people with disabilities face, she used the power she has to promote change.

That’s what all of us can do—use the power we have. We don’t all have a newspaper column, but we all have family, friends and a phone. We can get the story out, too.

Use your power to help people with intellectual and developmental disabilities. Join the Mosaic advocacy group, Mosaic Allied Voices.

The Children’s Guild “Ladies” Who Volunteer at ...

READ MORE
Have a Most Blessed Easter!

Have a Most Blessed Easter!