Despite the Worst of Circumstances, Shomari Emerged Triumphant

In 2007, Mosaic International formed a ministry partnership with a local nonprofit called Building a Caring Community (BCC) in the city of Moshi, Tanzania, to help those with intellectual and developmental disabilities. As the partnership has grown, BCC now provides day center and in-home services to more than 200 children and young adults to help them live a more meaningful life. During a recent visit, the Mosaic International team was pleased to see how those who came to BCC as children have now grown into successful young adults–including Shomari, whose story we are honored to share.

Shomari Daffa, 24, who was helped by BCC and Mosaic International, now lives a happy, productive life in Moshi. But his journey to get there was riddled with horrific challenges along the way that most other people would not have survived.

When Shomari was seven years old, he was  given the responsibility of tending to his family’s life-sustaining herds of cows, goats and sheep. Being alone for long periods of time left him at risk, and eventually one day, he was sexually abused.

“Children with disabilities are often the target of predators,” said Teresa Roll, Senior Community Relations Manager with Mosaic International, “it’s especially a terrible problem in developing countries where there is little infrastructure for reporting these incidents and a severe lack of preventive information for parents and counseling for the victims who are traumatized.”

This abuse caused Shomari to run away, which led to the family losing many of their animals that wandered off. When Shomari returned home, his stepmother, not knowing about the molestation, whipped him for deserting the herds. This further confused Shomari, and he ran away again–this time to live life on the streets, where he had little access–if any–to fresh food and slept in a garbage pit.

But despite those harrowing challenges, Shomari had the God-given passion and will to survive–and a miracle was coming his way to take him out of the filth he lived in to a place that gave him a more meaningful life in a safer, nurturing environment.

That miracle came in the form of his kind aunt and uncle who had heard about his plight from extended family members. Out of concern, they drove to Tanga to find Shomari. Once they did, they were shocked, easily seeing he was leading a squalid existence: he was filthy, wore torn and dirty clothes, and his hair and nails were exceedingly long. As a result, they took the young boy back to Moshi to live with them there–where BCC is located as well.

Out of love, his aunt and uncle enrolled Shomari in the Shauri Moyo primary school as a special education student. It was there when the BCC met him and his new family to undergo an assessment to identify specific support needs for Shomari. As one of the wonderful results, he qualified to be enrolled in BCC’s three-year Young Adults Program which emphasizes vocational training with the objective of developing work skills in order for attendees to become more independent.

According to BCC Young Adult Coordinator Jesca Kileo, Shomari became “very good at farming and gardening” at the BCC Center. Meanwhile, his uncle had a welding and pave stone workshop in which Shomari had voiced an interest, but his uncle was fearful he may get injured. With other BCC representatives, Jesca addressed his uncle’s concerns, and eventually convinced him Shomari was fully capable of learning the pave stone craft in order to further support the family and eventually, himself. 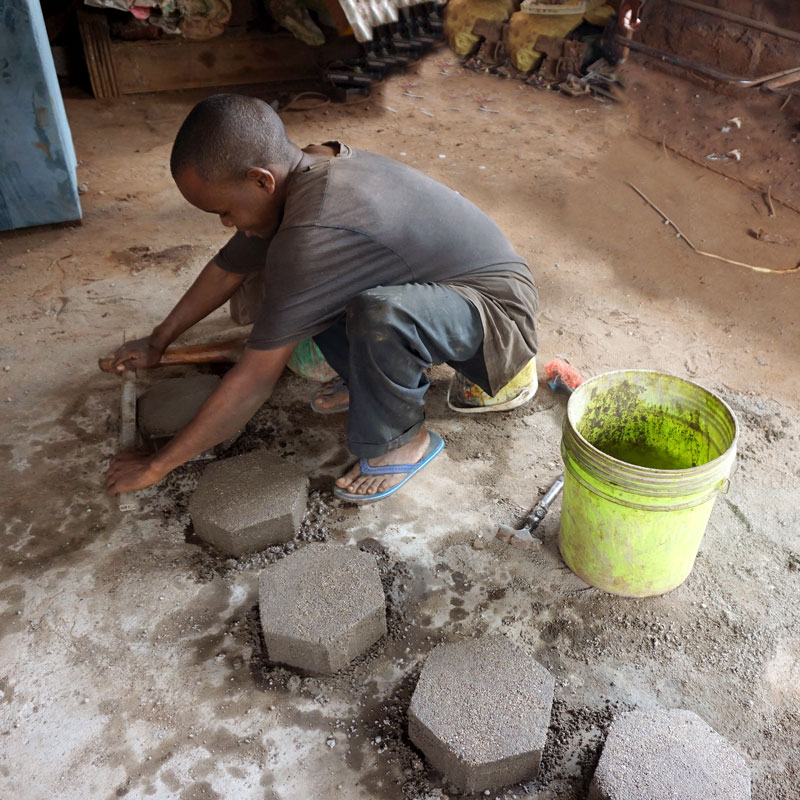 While pavement making is a time consuming, laborious job that has a multitude of steps and requires diligence, it took only two years for Shomari to become an expert. Such an expert that in fact, he currently fashions 19 pave stones a day–making an impressive equivalent of four US dollars–which is much above the Tanzanian poverty threshold of $1.90 a day.

While he may not be able to read and write, Shomari hasn’t stopped there. He’s taught pave stone making to three other young adults who in turn, have become experts as well, and together, with the help of BCC, they plan to grow a business where each of them can make 19 pavements a day. All they’re waiting for is a facility where they can do their work and expand it. BCC is helping them with this as well.

“It’s astounding to see how Shomari has become so successful from when he was neglected, abused and homeless,” said Teresa. “When I saw him last, which was just a few months ago, he was absolutely beaming while showing us how he made pave stones. He always has a smile on his face, and he’s grown to be a sweet, gentle man.”