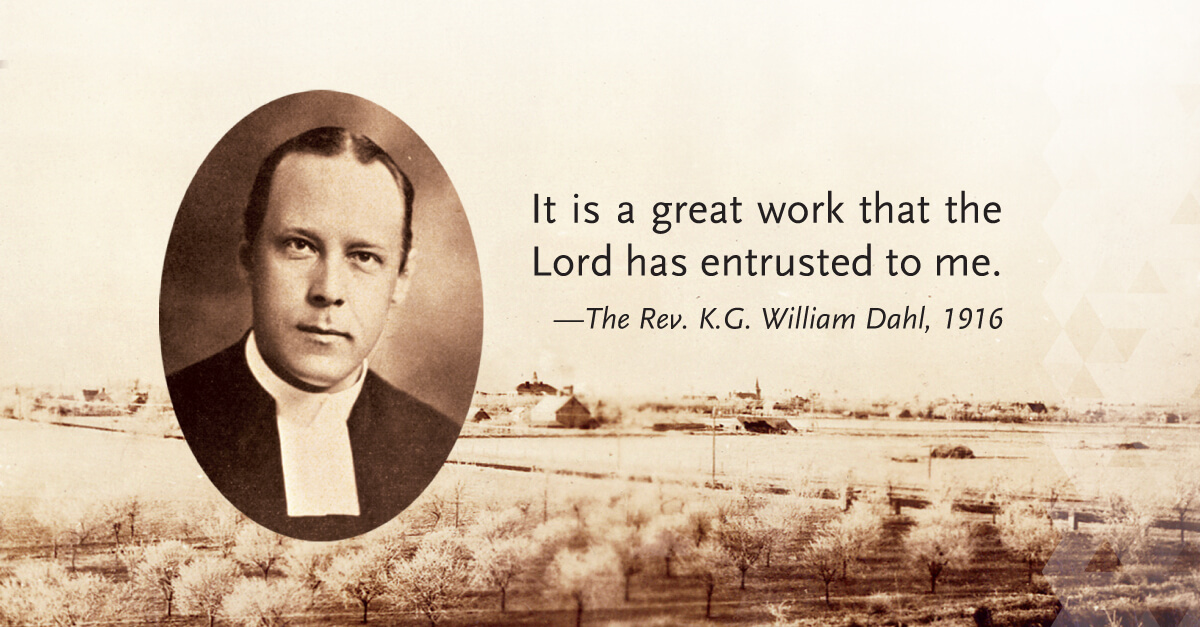 Mosaic celebrates its 105th Anniversary today. Here’s a story about the beginning. The story is from Mosaic’s Centennial book, “The Reason We Exist: Stories of Mosaic’s Call to Serve.”

Certainty of faith drove the Rev. K.G. William Dahl in his quest to create a home for people with disabilities and others who were on the fringe of society. In a letter to his family, dated Sept. 5, 1916, he wrote: “It is a great work that the Lord has entrusted to me out here and it is worth sacrificing oneself for.”

Four years earlier, Pastor Dahl considered the call to become the first pastor of the new Bethphage Church in Axtell, Nebraska, a confirmation from God that he should proceed.

On Nov. 18, 1912, he wrote to his “Beloved parents and siblings”: “… if it were God’s will, this institution should be located in the middle states and I then would receive a unanimous call to some suitable congregation. … on November 5, I received a unanimous call from the Bethphage Congregation in Axtell, Nebraska.”

As soon as he reached Axtell, he set about the task. Before departing the train there on Dec. 9, 1912, Dahl pointed to land north of the town and said to his wife, Lillian, “There is where we will build our mission.”

The local Lutheran clergy welcomed the new, young pastor and chose him to become editor of the new district newsletter, called “Guldax” (Golden Ear). To the surprise of his colleagues, he used the first issue, distributed in churches on Sunday, Feb. 16, 1913, to invite people to a meeting about the formation of an Inner Mission Society. The issue also carried a piece he wrote, titled “Withered Leaves,” which reads in part:

“Time and time again during the walk through life, it has fallen to my lot to come into contact with a class of our people, the most unfortunate of all, the incredibly large class, including those who have lost their minds or are in the process of doing so.

“I have found our parishioners in public institutions, battered and beaten until bloody, I have been sitting hourly in narrow dirty cells and talked with them during their more alert moments; I have seen them wring their hands in despair and heard their heartrending prayer: ‘Help us to get away from here …’

“Is there no Christian facility for the mentally disabled, the fallen (epileptics), and the idiots?’ a parent cried one time to me in tears … She had not too long ago had to see her own child taken to the State Asylum. What else could I say to her: ‘No, my poor friend, there exists no such place, no place in which our people can find refuge.’ However, I added half unconsciously, ‘Not yet.’ … and at the same time hope came to life in my soul.”

At the meeting, held Feb. 19 at 2 p.m., Pastor Dahl gave a presentation with the theme, “Am I my brother’s keeper?” His campaign was successful; more than 50 people signed up to support the newly named Bethphage Inner Mission Association.

Before the first resident arrived more than a year later, Pastor Dahl worked to rent suitable homes in the small community. He also continued his campaign to bring more people into the association and purchased the land north of Axtell he had spied from the train. Support, garnered through mailings of Guldax, came readily.

In a letter to his parents on Nov. 14, 1915, he wrote: “We receive support from near and far. During last week there came, among other gifts, $25 from China. An 81-year-old lady in south Texas sent 21 pearl necklaces to be sold for the benefit of the mission. It is wonderful how the interest grows.”

In May of 1916, the first home was dedicated on the acres north of town and Pastor Dahl called it “my greatest day.” It was soon followed with other buildings, including a small, frame chapel, on what grew to be a campus of buildings.

As the mission grew strong, Pastor Dahl’s health grew ever weaker. In the summer of 1916, he spent six weeks in an Omaha hospital. From there, on Aug. 6, 1916, he wrote: “The institution has developed unbelievably fast and has a very bright future, but I am not as strong as previously; there soon needs to be a stronger man at the helm.”