David Always Cared for Others Without Taking Care of Himself

March is National Intellectual and Developmental Disabilities Awareness Month (NIDDA), which seeks to raise awareness about the inclusion of people with developmental disabilities in all areas of community life. Mosaic will feature one person we serve each week during the month who exemplifies this national campaign by leading a BOLD life.

As the saying goes, “You must take care of yourself first before taking care of others.”

David McCabe, 63, is a kind man whose life has been spent, for the most part, taking care of others.

When David was 19, he moved to Coffeyville, Kansas, with his family–consisting of his parents, himself and two sisters, Sue and Dorothy. Sue had physical health needs.

In 2002, the siblings’ parents passed away, and being Sue’s caregiver fell on David’s shoulders. It was about this time when David began receiving case management services from Mosaic.

A few years later, David and his sister decided they needed even more assistance. David began receiving day and residential services from Mosaic. This included help with grocery shopping and doctor’s appointments. David also began attending day services at Mosaic which gave him the opportunity to participate in activities and meet other people.

In July of 2007, a devastating flood hit a large area of Coffeyville, and unfortunately, David’s and Sue’s home, which they had purchased after moving out of the family home, was determined as a total loss due to water damage and oil from a local refinery.

David said, “I was really sad; the flood destroyed our home and a lot of our stuff.”

However, with Mosaic’s help, David and Sue received funds from FEMA and the oil refinery. With this, they were able to purchase a new house perfectly sized for the two of them and move in later in the year.

In 2012, Dorothy came for a visit and decided she wanted to stay. Because the home was too small for three, Dorothy and Sue asked David to move out and live in a house Dorothy had bought.

Again, being the kind man that he was and putting others first, David moved out of the home he loved in order to keep his sisters happy.

David lived in that home his sister had given him for eight years. Then the pandemic erupted worldwide. Mosaic’s day services closed to ensure people served were staying at home whenever possible to remain safe. Because of this, Mosaic changed the way it was supporting David by visiting his house.

“We were incredibly shocked when we went into his home,” said Emily Yadon, Mosaic Direct Support Professional. “It was incredibly cluttered. The bathroom floor was rotting out, his gas had been disconnected due to leakage in the lines, and he was unable to afford the cost of the repairs. The home also had severe water damage and his oven didn’t even work. Through this, we also discovered he didn’t have heat consistently. It was overall unsafe due to its deteriorating conditions.”

Mosaic tried to move David out of the situation, but he refused the help. “I liked doing my own thing,” he said. “I [sic] really didn’t want the staff in my business.”

Ben Ames, Mosaic Program Manager, added, “On top of everything, Sue’s health was quickly deteriorating. After multiple hospital visits, she asked David if he would take care of her again because she needed physical help. The house she was living in with Dorothy had steps, and David’s didn’t.

“As always with family members, David couldn’t say ‘no’ to her, and that placed him under additional stress,” Ben continued. “His response was he loved his sister, and wanted to take care of her as long as he could.”

As the house became even more dilapidated–David continually refused help from Mosaic, as was his nature–Sue’s health continued to decline. He continued to be the best caregiver for her that he could. She had received services from another provider in the past, but had removed herself from them. Again, additional stress on David.

In May of 2020, Sue went into the hospital for what was to be her last time. Within just a few days, David called Mosaic to share that she had died. “He was overwhelmingly distraught about it,” said Ben. “But, he began asking us for help whereas he didn’t welcome it before. He asked us to help him with Sue’s memorial service.” Additionally, Mosaic staff encouraged David to look for a new home, and they helped him move into a problem-free apartment.

“From there, seeing things change for him is when it really hit home for me,” Ben continued.  “David was always focused on caring for and helping others–doing for others–and putting himself last. But now he started asking for more help. He began thinking about his life and what he needed to do for himself. He definitely has a servant’s heart, but he’s also finding himself now, and now he’s being more self-serving.”

Today, David is getting out more. He has a group of best friends, and he invites them over to his home to talk. (He’s also convinced them to bring the snacks!) Additionally, the local city recreation commission developed a “Buddy Sports” program, and he’s an active member on their softball team.

The positive change in David’s demeanor and his enthusiasm for the future also led him to be nominated and chosen for Kansas Interhab’s “Outstanding Personal Growth Award.” He also now works in a janitorial position with the Mosaic Coffeyville agency.

“Over the 14 years I’ve known David, there’ve been a lot of conversations and a lot of memories shared,” said Ben. “He’s one of the good guys, and I’m proud of him to see where he started and where he is now. It was probably one of my proudest moments when I saw David walk up to the podium to get his Interhab award. He was so happy.” 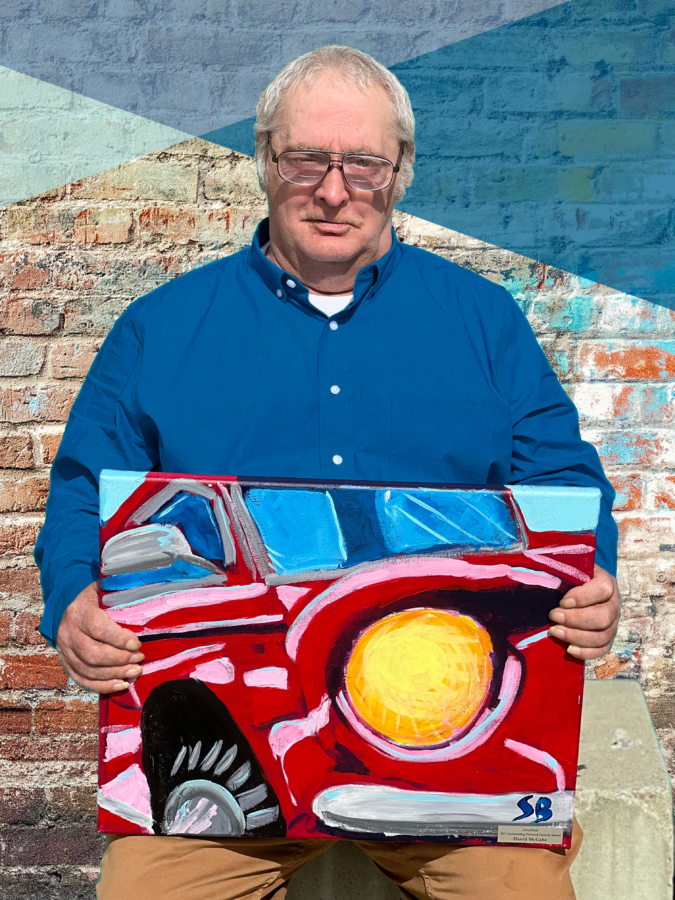