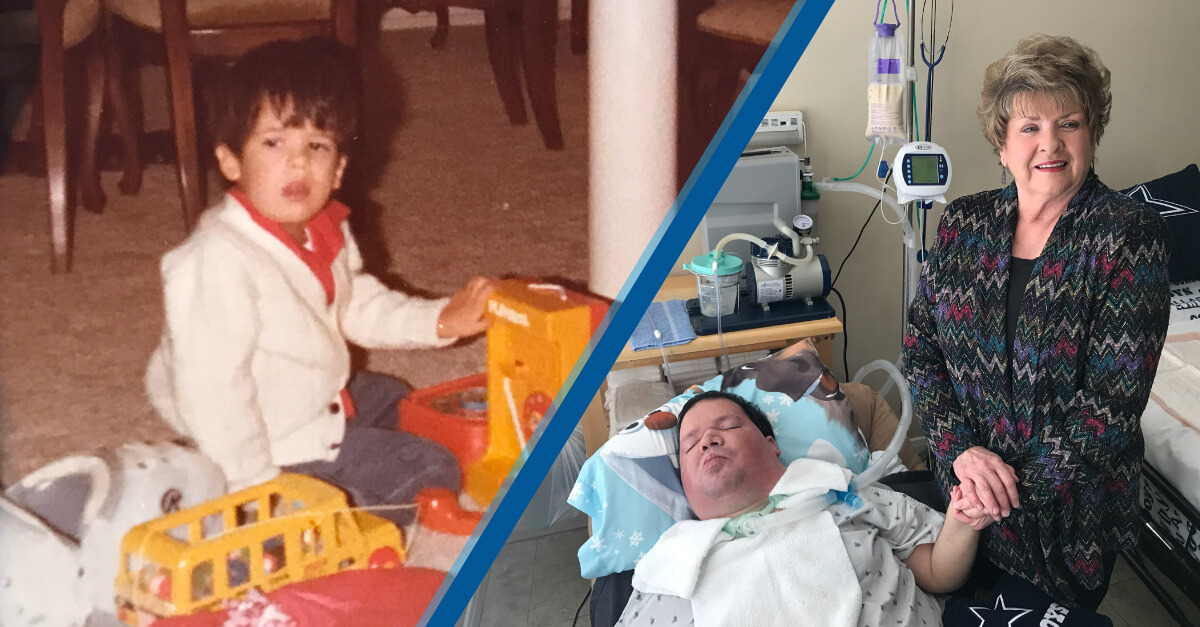 Linda and Jerry Roach did not shrink from the news their child had a disability. Instead, they embraced their son more closely. He became, they say, the center of their family—even as they watched his abilities go further than doctors expected and then slowly diminish as he aged.

Devotion would be an appropriate word to describe the dedication they show their son.

Kasey was the couple’s second child. Linda notes he was a good baby and the family was excited older brother Kyle now had a sibling.

There were no signs of anything unusual at birth, but over the first few months, Linda noticed Kasey was not progressing like Kyle had or like other babies his age. At his four-month check-up, the pediatrician said something unusual was present, but he could not determine what. He advised waiting a few months to get a better idea.

During that time, Kasey started having shaking episodes several a day. In response, the pediatrician sent them to a specialized clinic several hours from their San Angelo, Texas, home. At the clinic, Linda and Jerry had what she describes as “the worst day” of their life.

After seemingly endless waiting while the doctors tested Kasey, Jerry and Linda were told he had a profound intellectual disability and would never walk or talk. One of the tests, an EEG, showed that Kasey’s shaking episodes were seizures.

“We were totally not prepared for what we were going to hear,” Linda said. “After that I didn’t even hear anything else. We were so, so devastated.

“On the return trip we were talking about it. We would do whatever we needed to do. We were going to do everything that we could do to help him. Any mother or any father would do that.”

Linda will happily tell you what a good child Kasey was – and still is. After returning home, he began therapy. That, too, was a hard adjustment.

“I’d take him in, and they’d take him away from me,” she said. “I could hear him crying. They assured me they weren’t hurting him. They were moving his extremities, and it was not comfortable.”

The therapy continued until he was 5. Kasey became comfortable with it, she said, once he knew what was happening.

“They’d bring him out and there were 15 shades of lipstick on his face. They were loving him up,” she said.

Surprising everyone, Kasey did learn to walk and talk. Linda said he could sing about 100 songs and knew the Lord’s Prayer, the 23rd Psalm and the Pledge of Allegiance all by heart. But the seizures continued to grow in frequency and were not controlled either by medication or special diets.

When he was 8, doctors did a 24-hour monitoring EEG. They learned that Kasey was in near constant seizure, Linda said. With tears in his eyes, the doctor told the family he had never seen a child or adult in such a condition outside of an institution.

Linda and Jerry knew that wasn’t an option. They took him home. They enrolled him in school.

As he aged, Kasey lost his ability to speak and sing; he lost his ability to walk. Yet, the school system welcomed him. He attended until his senior year, when he became too weak to leave his home because of his compromised immune system. The school system considered him a homebound student and, although he couldn’t attend graduation, he received his high school diploma. His graduation announcement and senior photo hang framed in his room.

Kasey is now 42 years old and has been served by Mosaic in San Angelo since 1992. Through the years, Mosaic has provided more intensive services as Kasey’s needs have changed. Today, Mosaic staff, including a nurse, spend six hours a day with Kasey, every day except Saturday.

Kasey is not able to eat or drink by mouth. He uses a ventilator to assist with breathing. His parents and aides reposition him in bed several times a day. They use a ceiling-mounted track and sling system to give him his daily bath.

While his primary form of communication is blinking, by answering yes or no, his family and Mosaic staff all remark on his personality.

“He’s so easy to love,” Linda said. “Ask anyone who has been in our home to take care of him for any amount of time. He radiates love. He doesn’t demand. He doesn’t get mad. He doesn’t throw tantrums. He is so happy to have someone come in, hold his hand and talk to him.”

While Jerry, earlier in life, had a career as a dentist, today he and Linda co-pastor a church, the Victory Christian Center, in San Angelo. Kasey played a role in leading them to that call, they say.

“I know for sure we would not be where we are spiritually, we would not be pastoring a church if it were not for this young man,” Linda said. “We’ve seen the love and mercy and grace of God manifest in his life. You can’t be around that and not be changed.

“Every need Kasey has must be met by somebody else. He is totally dependent upon me, upon Jerry, upon Mosaic for everything. That just changes who you think you are, changes your identity.”

But while she’s away, Linda said her heart and mind never move away from her son as she wonders how he’s doing or whether he’s had a seizure, which now have subsided to around 8 or 10 a day.

Linda firmly believes God prepared her for this from the time she was a child and preferred Julie, her doll that needed routine repair and had a floppy head that could not stand up on its own, to all of her other dolls. She knows this, she said, because God reminded her of that doll once in prayer.

But, understand it or not, it is beautiful to know such love and devotion exist.