An Unbreakable Bond of Faithfulness

One of Mosaic’s four values is Faithfulness. To us, its core description is “remaining loyal to someone or something and putting that loyalty into consistent practice–regardless of the circumstances.”

There are all sorts of instances that demonstrate faithfulness across Mosaic; the story of Brother Raymond Papenfuss and Matt Cook, a person Mosaic in Northern Indiana supports, is among them. The two have a faithful, unbreakable bond rarely seen.

Brother Raymond was born in Fond du Lac, Wisconsin. He knew at an early age he wanted to become a teacher, working within the church. “I entered the Brothers of Holy Cross right after high school in 1952. At 19 years-old, I went to the parish priest and asked to enter the church not as a Father but as a teacher. I had a natural bent towards English literature and of course, theology.”

At age 26, Brother Raymond was called to Ghana, Africa, where he spent 28 years. He taught, conducted parish ministry, and worked at establishing a trade school to teach children who couldn’t afford high school to become self-sufficient.

Brother Raymond served almost 2,000 children in Ghana until 1987, when he had to return to the US after contracting cerebral malaria.

It was shortly after that time, Brother Raymond started volunteer work at a children’s state hospital near Notre Dame. There were 90 young people there. “I wanted to work with one person so I could really effect change. After speaking with the head of the facility, I gave my attention to a young boy, Matt, who at that time was just over five years old.

“Matt was born with intellectual and developmental disabilities. He also had physical disabilities–his brain was outside his skull, and he used a wheelchair. Cerebral palsy had also partially paralyzed his right side,” added Brother Raymond. “They said ‘he’ll never walk,’ which I understood, and ‘he’ll never talk.’ And I thought to myself ‘that’s because there’s no stimulation here.’” 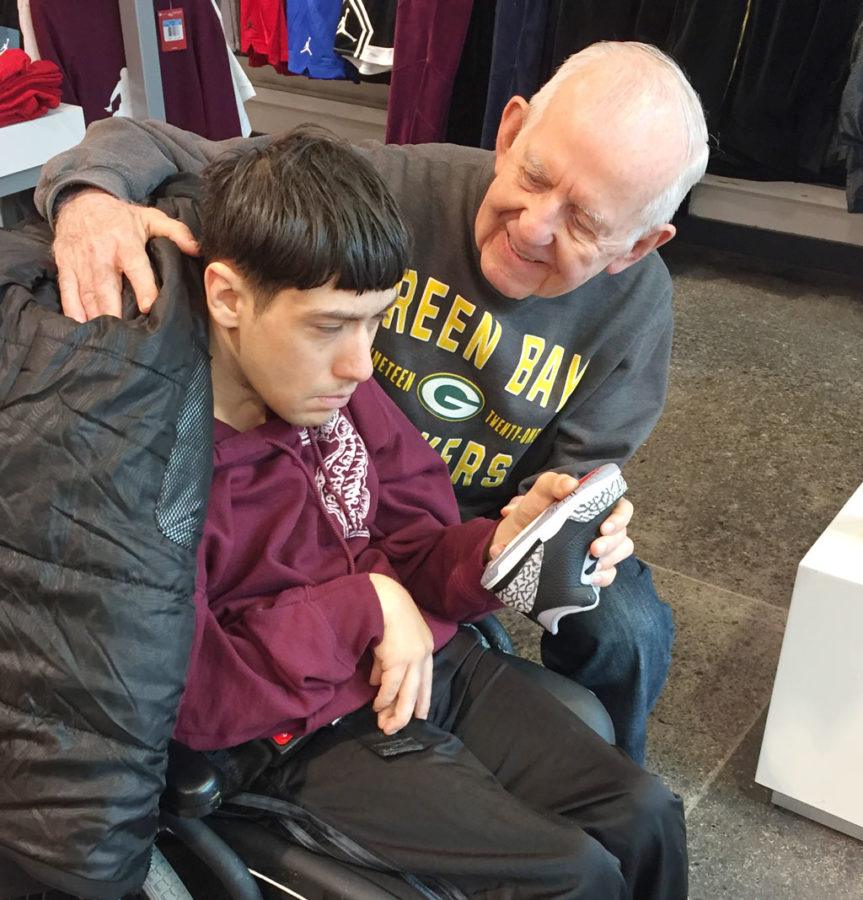 According to Brother Raymond, he was able to secure Special Visitors Status at the hospital, which gave him access to Matt’s records and the ability to take him out on weekends. “On Saturdays, I started taking him to the mall about noon to 2 p.m., then we went to services at St. Joseph Church at Holy Cross College. Afterward, we’d go to Bob Evans for supper. I wanted him to experience a normal routine.”

These visits began to work. They grew very close, so close that Matt saw Brother Raymond as his father.

“Matt was beginning to be a teenager,” said Brother Raymond.

Brother Raymond wanted to transfer Matt out of the state residence, and he was eventually told by a state case manager there was an opening at Mosaic (at that time, Mosaic was called Bethphage). “I responded, ‘let’s try to get him in there.’” This was 1996, when Matt was 15 years old. He was accepted and placed in a Mosaic group home in the area.

“I cut my time down with Matt to three days a week, because I wanted him to also bond with the people at the home,” added Brother Raymond. “That’s where he has lived since then, and that was the first time he referred to where he was staying as ‘home.’”

“Matt doesn’t talk much–he can talk some and is good at communicating in other ways. The longest sentence I’ve ever heard him say was ‘home, home, bed.’ It was clear he was tired. If he wants water, he places his left hand up to his lips,” stated Brother Raymond. “He’s fully aware what’s going on around him and what it means.

“He’s very happy. If he weren’t, I would know it. Among the people living in his Mosaic group home is a fellow named Kevin, who has taken over there as Matt’s protector. If anyone approaches Matt in an incorrect manner, Kevin gently steps in. When I take Matt out and bring him back, Kevin will kiss him on the head as the resident patriarch.”

It’s important to note Brother Raymond and Matt will continue their wonderfully strong relationship as long as they can.

“Matt will be 40 in mid-September, and although I’m still in excellent health and active playing tennis, I’m now 88,” concluded Brother Raymond. “There was a time I thought I was going to bury Matt, now I know he’s going to bury me. As his meds can continue to work and Mosaic continues to give excellent support to him, he can live a long time.”